Recently finished Marshall Goldsmith and Mark Reiter’s What Got You Here, Won’t Get You Here. It was cited in a meeting with a startup cofounder as a helpful book for his own success (and his company’s). 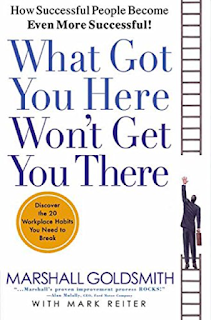 Off the bat, I was expecting a busy book of sorts, but instead, realized that the “You” in the title was more about YOU. The context shifted quickly, and I wasn’t prepared for it. Meanwhile, I didn’t know what to expect, let alone chapters and break-downs of how those who wish to ascend to greater success must constantly improve… starting with the things that – shall we say – rub people the wrong way. Yes, the book actually delved into character faults.
Goldsmith dives into 20 habits/ faults/ common rubs describing situations, ways to catch them, importance of resolving, resolutions, and some anecdotal results.
Here were some of my take-aways:

Per earlier, there were 20 habits mentioned. I read this book over a couple months, and admit I couldn’t recall many of them. However, as I look at a book summary to help jog my mind, I remember each easily. The habits are… not necessarily anything new. However, like many great minds, Goldsmith is able to put structure to habits to construct this list.

There are a lot of habits. Goldsmith did not offer a solution that I found to be effective to absorbing the habits, let alone being cognizant of them. Like the sales books (e.g. the Challenger Sale, SPIN), I can’t try to improve on everything. Instead, I have listed a subset of the habits that resonated with me most. I will work on the subset (or a subset of the subset). It takes practice. It takes diligence. However, my “There” is not that far, and I need to be ready to grasp it when it’s in front of me.