Warning: Creating default object from empty value in /home/customer/www/daryllu.com/public_html/wp-content/themes/enfold/config-templatebuilder/avia-shortcodes/slideshow_layerslider/slideshow_layerslider.php on line 28
 resolutions Archives - Daryl "Entrepreneurial Ninja" Lu
I just watched a great TED talk by Laura Vanderkam – “How to Gain Control of Your Free Time”. I won’t go into detail about her talk because I’m going to save my big take-away in a near-future post. However, the point I want to share today is Laura’s idea regarding year-end reviews – write next year’s year-end review today.
Laura suggests essentially starting at the end, and working backwards into the schedule.
Laura went on to suggest we set 3-5 goals in three areas of our lives – career, relationships, and self.
In the spirit of many others doing year-end reviews, I’m going to do the Year Before Preview with Laura’s help/ suggestions. Here’s a snippet of my Year Before Preview… 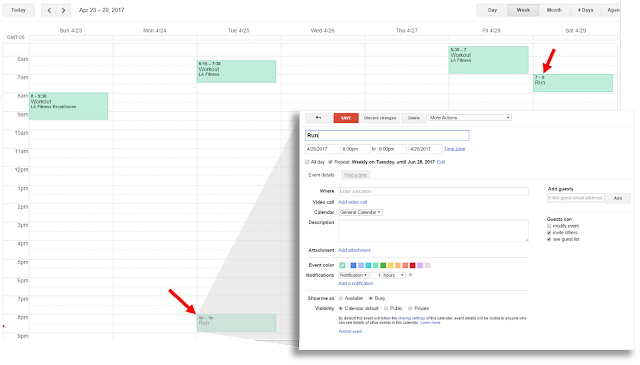 I know myself, and know that I’m going to do a lot of other activities including yoga at 3-5x per week, but I decide that the week before. Meanwhile, I have my three workouts scheduled already. So at a minimum, I’ve scheduled dedicated running times twice a week (there will be a soccer day in there somewhere, too).
This is a recurring event now on my calendar between the end of April and July 4th when the Peachtree Road Race takes place.

Goal (in Professional): I’ve blogged twice weekly throughout 2017 about startups and entrepreneurship. 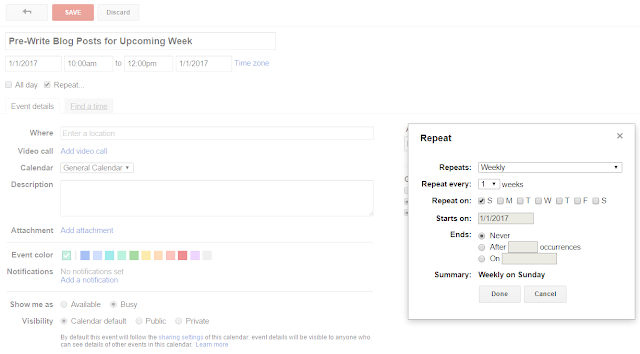 I’m pretty quick with my blog posts… relatively. So, I’m dedicating two hours every Sunday morning after my morning workout to pre-writing my two blog posts for the following week. This makes it so much easier for me to just review, approve, and publish the posts during the week.

In this case, I don’t have a “metric” per se on building stronger relationships. However, I’ve set this in my calendar so that every Thursday starting at 7PM and Saturday after 5PM. That is, I will not be working during these hours. I’m going to leave it open to make plans with family and friends.
Of course, this particular goal is also dependent on friends and family. Should I not spend this time with friends and family, then I can always dedicate this to myself.

Now, we’re onto the final chapter of the 3-part series. This is tricky one only because, well, it’s like making public declarations of my intentions. If I fail, again, it’s public. There’s that accountability factor. Okay, so focusing on the short (for 2015) and long-term goals (beyond)…

“Hacking” here is admittedly broad as I’m referring to hacking in the programming sense and in general business. Till I find that startup that keeps me going, I’m aiming to push a new idea out every 30-60 days (with half that time devoted to customer discovery, build out, launch, and the other half towards marketing and growth).
If an idea doesn’t see much traction, I learn and move on. After I spoke to one of the cofounders of Hired.comthis idea really resonated with me, and was recently suggested to me by another entrepreneur I’ve come to know well.

For whatever reason, I was life hacking (yes, hacking my life) trying to become more direct, and I surprisingly introduced just “No.” as a response to others. That is, just saying, “No.” instead of saying, “Well this is why this might be a better way…” or “I don’t see it this way.” This is more apparent in verbal conversations.
I remember the Allison Gilmore, Director of the PhD program at Emory’s Goizueta Business School (also performs Improv), giving my MBA class a session about responses. She taught us how “No” and “No, but” really shut down people. For whatever reason, this flew over my head, and I was doing the opposite. Even “no, but…” would be a better response than the curt “No.”
So I’m tracking when I give the short “no” in hopes of responding in a more positive way. Of course, I’ll throw in a “no” if/ when appropriate.

Stop taking on so much.

I love to help people, but sometimes, that means I say “yes” too much. In light to the above about saying “no”, I need to be able also say, “Sorry, but I can’t do XYZ…”
This past year, I volunteered a lot of time helping other startups, sometimes with little to no compensation. I took these chances as good learning opportunities, but now that I’ve got some other opportunities going, my time is that much more valuable. As such, this year will be the year of smarter multi-tasking.

When I say communicator here, I’m also really focusing on the listening part. Late last year, I got some good constructive criticism that I have been… very energetic to different opinions. I’ve done a pretty bad job at keeping my emotions out of specific subjects, and I’m aiming to parse out the emotions in favor of patience and understanding.
Roger Fisher and William Ury’s Getting To Yes: Negotiating Agreement Without Giving In suggests that I take more of an interest-view rather than positional. In future disagreements (or just differing opinions), I’ll be more cognizant of others’ viewpoints (diversity is good). Especially where others may be affected by emotional attachments, it’s best for me to realize that it’s not oftentimes a personal attack. So I’ll need to take a step back, get a better understanding as to why, and make a mature approach from there.

I used to be good at this – taking the time to attend Atlanta Startup Villagemeet-ups or other gatherings. However, I made excuses the second half of last year, and just stopped. This year, going to start attending startup events around Atlanta more often.
Goal is twice a month and make genuine connections.

Volunteer at least twice every quarter.

I’ll probably get back into Habitat for Humanity as the charity/ volunteer organization. I like what they do, their approach, and I like the skills and lessons I get out of each build.

Probably the most important one, but this is everlasting… This past Christmas and New Year’s, I got to spend with my immediate family and grandparents down in Florida. I couldn’t help but take a pause every so often to see my family laughing and walking together, and it was an amazing feeling to be a part of that.
Add to that, every minute I spend with my little niece my love for her grows exponentially. It’s amazing just watching her develop. I’m looking forward to strengthening my relationship to everyone in my family, and my good friends.

This needs no explanation other than it’s a bad habit. There. That was easy. Next!

Just because three plates is bad ass territory.
Also, yesterday, I just stunted a lot of good growth by straining my hamstring at a soccer game. Why? Because of poor warm-ups. Why? Because I was late to the game? Why? Because traffic was terrible. Why? Because I, Daryl Lu, failed to leave for the game on time from work. There. It’s my fault. So, I also need to stick to my schedule to prevent lateness which can prevent warming up which can cause hamstring strains.

Be featured in TechCrunch, or other national publication.

I’d like to have a startup be featured in TechCrunch… just to have that daily newsletter come into my Gmail with my startup’s name on it. Or maybe have an article republished on Entrepreneur.com or Inc.com… that’d be cool.

Build a lasting startup with at least $1MM in recurring monthly revenue.

$1MM’s a “wow” number, and I think that’d be sufficient to have a decent-sized startup team to lead to even greater.

Give a TED Talk, or other industry conference.

I’m sure as part of my journey, there’s going to be something enlightening that no one else has talked about yet, or maybe I’ll expound or counter on another.

Obviously that even though this is part 3 of the Reflections 3-part series, like any good book or movie, it’s really just a glimpse of things to come. Hopefully, this post whets your appetite for your own goals both short and long-term.

Also, if you actually want to learn how to throw Ninja Stars, check out this YouTube video: https://www.youtube.com/watch?v=D_w6T4nO-KA