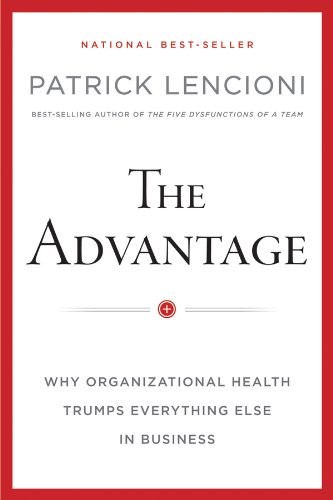 I just finished The Advantage by Patrick Lencioni on why organization health is the number one reason companies succeed. Lencioni argues it’s the true competitive advantage companies have. 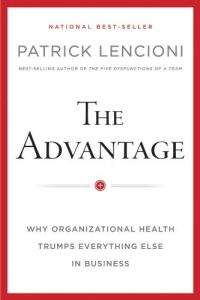 The Advantage by Patrick Lencioni
I’ve read a lot of business books and have gone through an MBA program to learn about competitive advantages and the “it” factors that makes some companies better than others. Most of the readings have been about culture with a sprinkling of motivations. Culture makes the most noise for success, and it’s not a surprise. Culture is more uniquely applied for a company. How it operates with values and its mission. If values and the mission provide the map of a company, then organization health is the step-by-step directions to navigate.
The key take-aways:

This book was recommended to me by a friend who works at one of the top companies to work for in Atlanta. It’s not surprise why he recommended this as he’s seeing the book’s influence at his company. It’s clear to him how Lencioni was onto something on building organizational health.

August 8, 2018/0 Comments/by Daryl Lu
http://www.daryllu.com/wp-content/uploads/2018/08/the-2Badvantage_book-2Breview_pic1.jpg 500 333 Daryl Lu http://www.daryllu.com/wp-content/uploads/2018/10/entrepreneurial-ninja_logo_sm.png Daryl Lu2018-08-08 10:29:002018-10-29 00:57:11Book Review: The Advantage by Patrick Lencioni
There’s something in the water because I’ve run into several instances in the last week where people have become new managers. I’ve managed folks in many different capacities over the years including soccer teams/ organizations to consulting project teams and to direct management like today.
There’s an art and science to management of people, and as I think back to those who have managed me (or do still), the key ingredients include authenticity, trust, and goals/ challenges.
Here are some thoughts on management and accompanying books I recommend:

Leading and managing a team can be difficult, and it doesn’t make sense that just because you’re good at something, you should be leading others. How well you lead them also goes beyond how you impact them directly. Effective leadership is best assessed by the downstream effects of those your team member end up leading. Management is surely one of the hardest and noblest tasks you can do. Be prepared.

April 27, 2017/0 Comments/by Daryl Lu
http://www.daryllu.com/wp-content/uploads/2018/10/entrepreneurial-ninja_logo_sm.png 0 0 Daryl Lu http://www.daryllu.com/wp-content/uploads/2018/10/entrepreneurial-ninja_logo_sm.png Daryl Lu2017-04-27 12:10:002017-04-27 12:10:00Management Keys and Recommended Reading
While writing last week’s brainstorming post, I read NY Times’ article about Google’s pursuit of finding the “perfect team”. The article touched on how the most effective teams all operated very differently, and there was no clear pattern amongst groups… kind of.
There was no clear correlation to successful teams being friendly outside the office versus those with no outside office interactions. There were successful groups of full of introverts and those full of extroverts and then teams mixed. Teams made up of exceptionally bright individuals didn’t directly translate to outperforming teams with less-exceptionally intelligent individuals.
Instead, one key element that all high-functioning teams exhibited was everyone having an equal voice – speaking roughly equal amounts. Teams heavily dominated by a few did not function nearly as well as those more “talkative” groups.
Further, high-performing teams had team members who would engage in conversation regardless of function or experience. Everyone weighed in with general thoughts plus their experience and area of expertise. These teams exhibited high “psychological safety” where team members could speak out without fear of others judging or being critical. Everyone could freely and respectfully interject one another.
Perhaps then, it’s no surprise high functioning teams scored high on emotional intelligence in order for psychological safety to exist. Team members would be perceptive of how others in the group felt and would address those feelings directly, rather than ignoring or not knowing at all.
The article pointed what subtly fascinated me in my team’s recent brainstorming – this implicit psychology safety net (and indeed culture) that I’ve noticed has been lacking in many companies I’ve worked with over the years. There’s still this notion of the leader(s) having full direction and control and everyone else are subordinates. It creates a gulf in leadership abilities, detracts from confidence, and hampers innovation.
March 8, 2016/0 Comments/by Daryl Lu
http://www.daryllu.com/wp-content/uploads/2018/10/entrepreneurial-ninja_logo_sm.png 0 0 Daryl Lu http://www.daryllu.com/wp-content/uploads/2018/10/entrepreneurial-ninja_logo_sm.png Daryl Lu2016-03-08 13:00:002016-03-08 13:00:00Recap of Google’s [Long Article &] Pursuit of the Perfect Team
Scroll to top