Just finished reading/ listening to Predictable Revenue by Aaron Ross. It’s been referred to as the sales Bible by several sales pros. Just so happened I never read it till now. 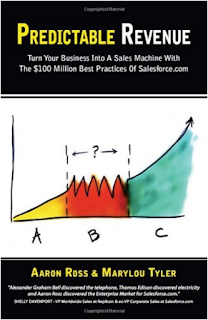 The book is written by former sales leader Aaron Ross as he helped implement the structure and strategies to scale Salesforce.com’s sales model.
My take-aways:
This book was recommended to me by several people, but I read it after the Challenger Sale (review here) after the recommendation of a colleague. As you can surmise from this review, Predictable Revenue is much more high-level than the Challenger Sale – Challenger being the more tactical sales approach.
There’s a lot of good take-aways, and finer details buried throughout the book, that this will be a reference tool for me in the future.
November 9, 2016/by Daryl Lu
http://www.daryllu.com/wp-content/uploads/2018/10/entrepreneurial-ninja_logo_sm.png 0 0 Daryl Lu http://www.daryllu.com/wp-content/uploads/2018/10/entrepreneurial-ninja_logo_sm.png Daryl Lu2016-11-09 16:26:002020-12-09 10:11:38Book Review: Predictable Revenue
I first heard about John Greathouse from one of David Cummings’ posts of the top startup blogs he follows. I admit that I don’t often read his blog, but his recent post “How To Network With Really Busy People” is resonating with me well.
Currently, I’m working with a startup to get leads and sales. I’m not full-time with them, or officially employed in anyway, but I’m helping out because it’s one of the slickest marketing tools I’ve ever seen. That, and the chance to continually learn and hone my business development skills is very much welcome. I haven’t quite figured out my Next Move (with this company or otherwise), so taking this approach gives me some latitude to do so – figure things out.
Anyways, John’s article is titled Networking, but let’s call it what it’s really about – sales. Or at least, what he’s really writing about. I’ve been working with this new startup, and it’s been a bit of a challenge, to be honest. These days, cold calls can definitely lead to opportunities, but they’re also becoming more difficult per John’s post.

Indeed, in my recent efforts, it’s fascinating the routes many people take to deflect calls. Cold calls are hard for a reason. The CEO of a sales organization I recently talked to isn’t so bullish on cold calling – “that’s so 90s”. What I’ve found, and what John writes about is the need to really pay attention to your messaging. That’s stupid advice, right? Good. Then you’re onto something, too. No, seriously, here are some methods I’ve been using that has been finding some more success mixed in with John’s advice:
I’m in the midst of testing out many different strategies for sales. It’s not a clear process all the time, and in fact, it’s a living and breathing process of meeting a prospect on the other side of the table. Some of the above are learned and experienced by myself and borrowed from John, but things like the last one are so open that they’re hypotheses in flight. I’ll have to follow up with what works and what doesn’t work later.
What are some tips for selling your product or service via cold communications/ networking? How would you sell a new product or idea that many entrepreneurs or startups often do?
June 25, 2014/by Daryl Lu
http://www.daryllu.com/wp-content/uploads/2018/10/entrepreneurial-ninja_logo_sm.png 0 0 Daryl Lu http://www.daryllu.com/wp-content/uploads/2018/10/entrepreneurial-ninja_logo_sm.png Daryl Lu2014-06-25 15:35:002020-12-09 10:18:09You and Your Clammy Hands Can Win at Cold Calls… Maybe
Scroll to top