Today, I went to Lee’s Bakery for bánh mì sandwiches for lunch.  It was crazy good.  You should go get yourself the bbq pork bánh mì   They also have chicken and other meats if that’s your deal. 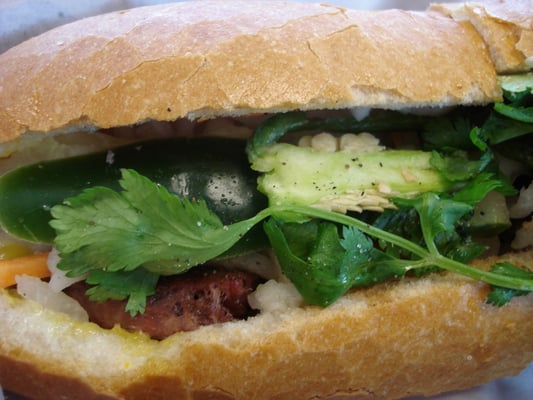 I was standing in line waiting to pay, and I was just watching the cashier ring people up, and watching the servers take orders scribbling on their little pads, frantically going back and forth between the tables and the kitchen.  I was thinking about how technology has invaded so many parts of our lives where in so many other shops, you see business starting to adopt tablet-oriented point-of-sale (POS) systems.  In all the English as a Secondary Language businesses (I’m dubbing them “E2L”), why is the rate of adoption so much lower compared to their English-dominant counterparts?

I don’t know these E2Ls very well, and these thoughts are largely off the cuff.  However, I do believe there’s some real opportunities here to fill the void that is leaving behind the rest of the countries around the world, and in many ways, the mini-countries in our very backyards.  Similar to speeches, you have to know your audience and adapt your speech to the listeners.  In the case of E2Ls, no one is really speaking their technology language.  My grandparents didn’t grow up with a lot of technology, but by setting up their new laptops with simple things like language packs and streamlining the computers, they can easily call me on Skype at 2AM.
Like I said, I’m not a pro at this.  It’s just a casual observation that I’d love to hear some feedback on.  The same hurdles for new tech adoption remain, but currently apps won’t help these E2Ls adopt at all.  Of course, not everything needs another layer of technology and there is the issue of just adding another complexity to selling — not just new tech, but potentially a language/ cultural barrier, too.
So what are your thoughts?  How would you market a POS system or even new technology to these E2Ls?
October 16, 2013/by Daryl Lu
http://www.daryllu.com/wp-content/uploads/2018/10/entrepreneurial-ninja_logo_sm.png 0 0 Daryl Lu http://www.daryllu.com/wp-content/uploads/2018/10/entrepreneurial-ninja_logo_sm.png Daryl Lu2013-10-16 21:18:002020-12-09 10:16:02Our New Tech Doesn’t Empower English-as-Secondary Language Businesses
Scroll to top