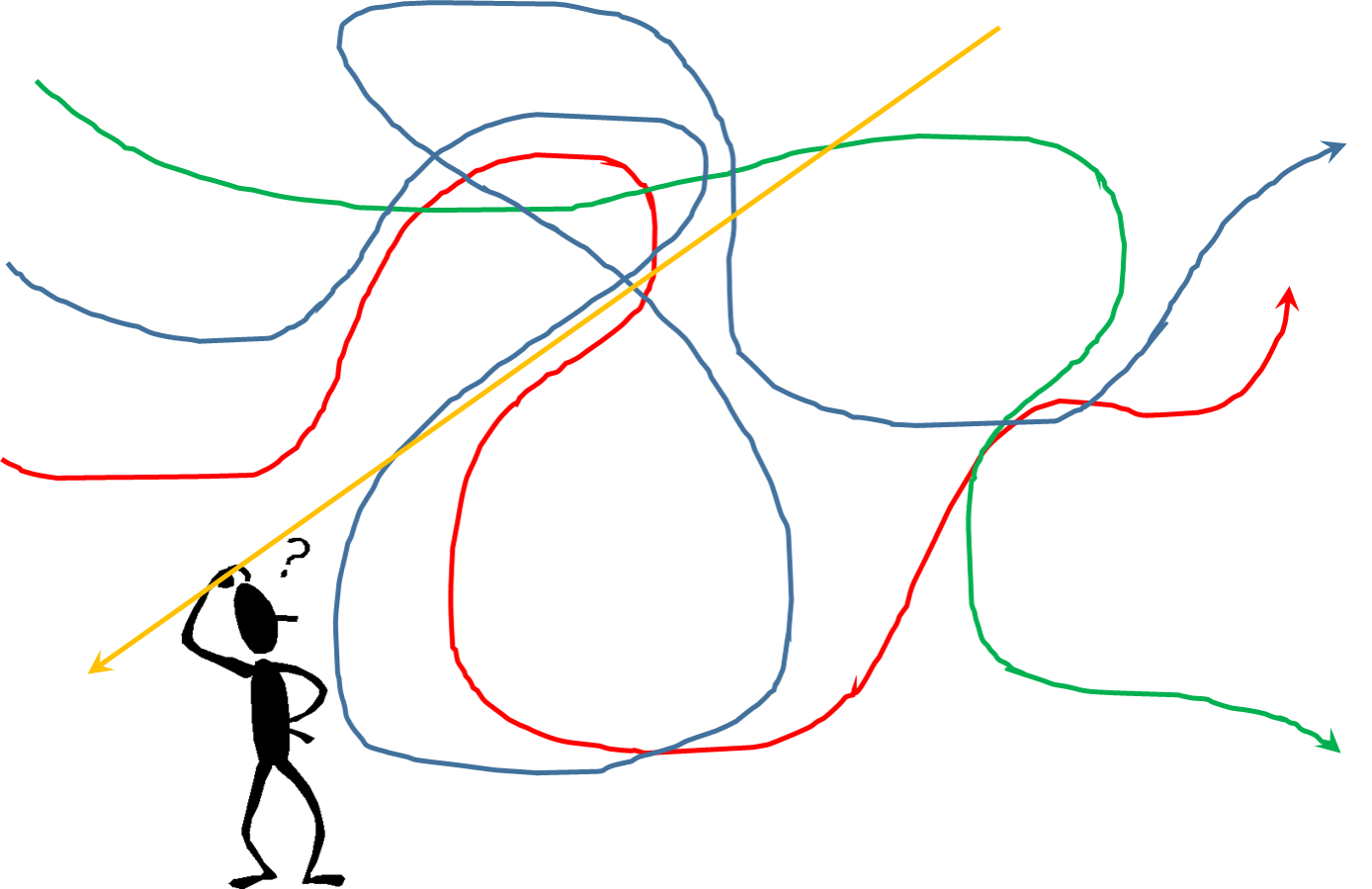 Back in November, I wanted to wrap my head around what was going on in the world. The world has been moving so fast, and if you’re looking to build a successful venture that can withstand some sense of time, I believe you have to either recognize where the world is going, or play a role in building the future.

At this time, I also read about how many brick and mortar retailers were employing new technology and ideas to combat online retailers, especially Amazon. Retailers will (some already are) tracking your every movement once you’ve walked into the store to understand customer behaviors. Heck, even gas stations such as Tesco are looking to install screens at gas pumps to target advertisements vis-a-vis facial recognition.

This got me thinking that to build a startup, you can also look at ways to help those who are on the brink of… death. Think about it. With the rise and quicker deaths (or barely living) of companies such as RIM (Blackberry), Kodak, Nokia, etc., it’s imperative for large companies who are far from agile to plant defenses for their own mortality. Perhaps, then, even dying companies when shown a grim future can be a hot market to address. I can’t help but think of also how companies like NCR and IBM pulling at their collars over the shifts from large antiquated point-of-sale (POS) systems to more agile mobile payment cloud solutions.

So, without further ado, I put together a spreadsheet (woo, spreadsheets) back in November trying to plot out some different trends I’ve been seeing. I’ve included the following fields to try to put some context on the trends in hopes of finding a good position to situate a startup. 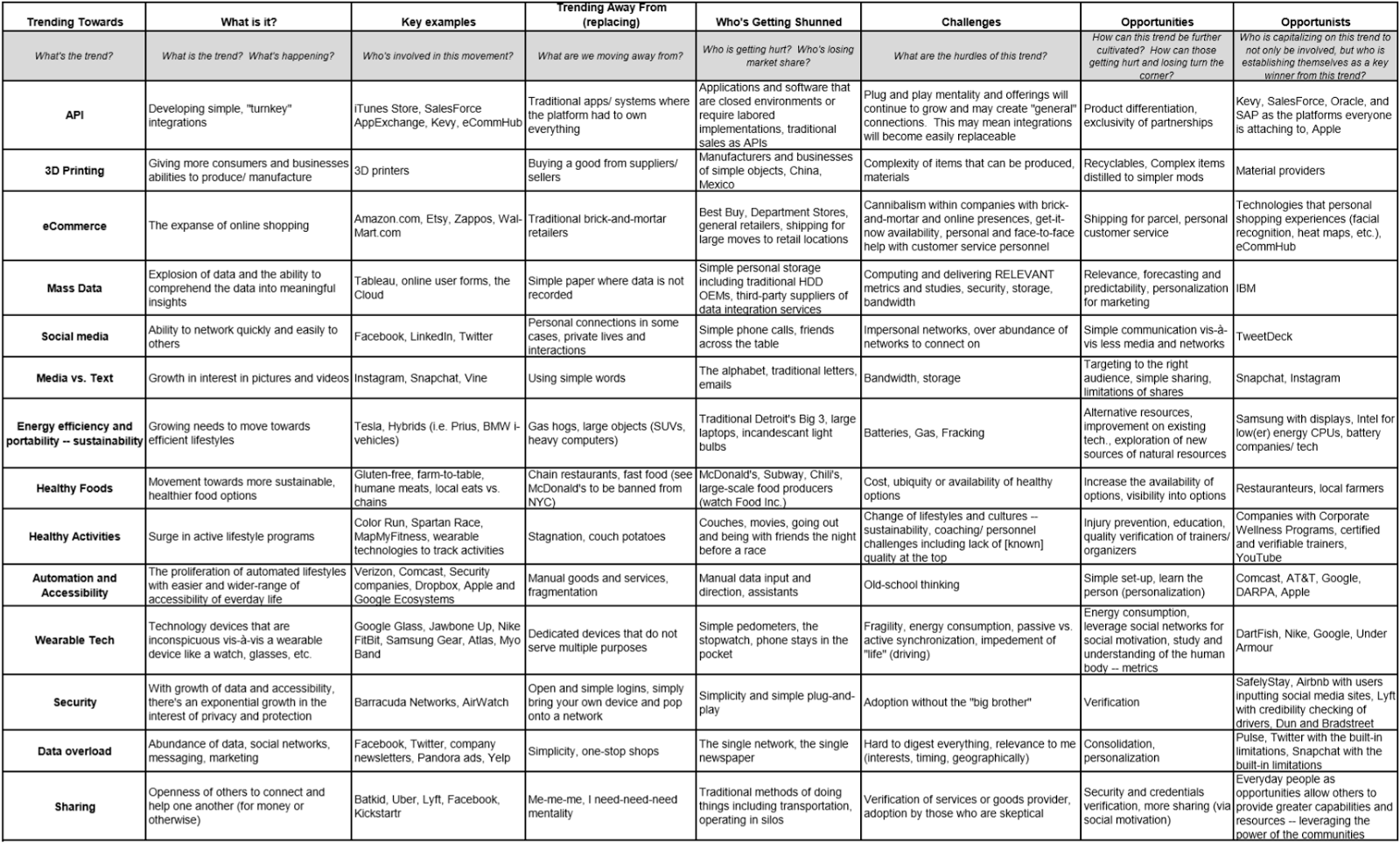 My list is just as far as my eye can see, and so it’s apparent I’m not in the details of every industry, nor do I know of all the great startups already around. So, this list is definitely not exhaustive. If you’re looking for a copy of the above, just shoot me a message on LinkedIn and I’ll be happy to send it to you.
So what are your thoughts of the trends? What are some other trends you see we’re going?
March 5, 2014/by Daryl Lu
http://www.daryllu.com/wp-content/uploads/2018/10/entrepreneurial-ninja_logo_sm.png 0 0 Daryl Lu http://www.daryllu.com/wp-content/uploads/2018/10/entrepreneurial-ninja_logo_sm.png Daryl Lu2014-03-05 14:43:002020-12-09 10:18:13Trends for Startups and Ideas to Build the Future

Today’s post, not so much supply chain specific, but just as ninjas should be, I’m going to be flexible and talk about employee morale and culture.  I just finished reading an article by Fortune magazine re-posted on CNNMoney.com titled “Wal-Mart and the perils of ignoring staff complaints” (article is linked here).  I know myself and countless others have been thinking about how Black Friday has not-so-subtly crept into Thursday with many retailers opening their doors at 8PM on Thanksgiving Day.  It’s like 2013 car models have hit showrooms in August 2012 or Christmas decorations the day the spider web, pumpkins, and other Halloween decorations are taken down. But this time, creeping Black Friday into a holiday… that’s interesting.

The article primarily talks about how unhappy staff members are kept out of the loop of big changes (i.e. opening doors at 8PM on Thanksgiving Day for Wal-Mart).  The staff are now forced to work on a holiday where we, the consumers, get to relax and have time off to spend with our families.  The staff used to have this same holiday and time to spend with family.  Not so much anymore.  Big companies such as Wal-Mart, kinda-sorta big RIM (maker of Blackberry devices), and the like have had track records of ignoring staff.  Without a means of discussing complaints internally and with the explosion of social media, it only makes sense for these same employees to voice their frustrations out in the open on Facebook, Twitter, etc.  And that just makes everything spread like wildfire.  And to make things worse, some of these companies just fail to even address the complaints, and instead, send a canned, generic response which then adds fuel to the fire as more staff jump in igniting more attention from the outside world.  See the vicious cycle?

As we think about great companies and the bad, we think about the brand image.  The article went further to highlight a Weber Shandwick study (see study here) on company reputation and found that 63% of Execs say their companies’ market values are tied to reputations.  That doesn’t shock me.  How much do we hold Apple, Google, IBM in high regard?  Look at their stock prices… 561.70, 665.87, and 190.29, respectively as of November 21, 2012 4PM EST).  If you’re like me, you believe they have pretty good reputations and that they’ve got pretty good track records (in general) with their employees.

And you know what?  It’s not just about the employees of Wal-Mart, too, who actually now miss out on some nice family time.  I mean granted, to get ready for Black Friday at 12AM or 6AM still calls for some work on Thursday, but 8PM on Thursday just forces staffers to move up that time table.  However, it’s not just the staffers, right?  Thinking about it from a supply chain perspective, all the different movements in the supply chain also requires shippers, transporters (i.e. truckers), customer service centers (call centers), and the like to also move their time table up.

So as you consider Wal-Mart and other retailers’ employees, consider the holistic view of everyone involved who makes Black Friday happen.  I guess we should start calling it Black Thursday or Black Thanksgiving.  Not sure how I feel or if I’ll be out elbowing my way to the latest and greatest deals, but I’ll take the time now to give thanks to the hardworking men and women who make commerce happen, if you wanted to work or not.

And of course, I give thanks to YOU for reading… stay tuned for my thoughts on culture.  I ended up writing more than I thought so I’ll make this part 1 of… a couple. Cheers and Happy Thanksgiving!