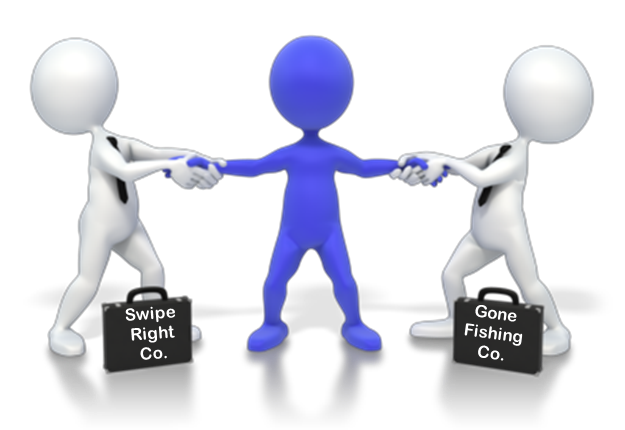 If you’re single and ready to mingle, chances are good you have a number of “online dating” apps on your phone. They’re everywhere — the usual suspects of Match.com, eHarmony, OkCupid (a Match company now actually), Plenty of Fish, etc. are joined by the swipe-addicting Tinder, Hinge, Twine, and so many more. Most of those apps and companies didn’t exist three years ago. However, this post isn’t about dating apps.

Looking across different industries, you see the same explosive growth in companies. From travel, you’ve got Travelocity, Expedia, Hotwire, Kayak, and Booking.com with more recent newcomers including Airbnb, Hipmunk, SafelyStay, etc. Even in the CRM space you had SAP, Oracle, etc. with their own solutions and then Salesforce has pretty much taken over, but you have to add in the SugarCRM, Zoho, and so many more. Now, let’s also add in the explosion of wearable technologies to be spearheaded by Google’s announcement of a designated OS called Android Wear. Yowza.
A couple posts ago, I shared some recent trends I had been seeing and perhaps not explicitly said, it’s apparent the suppliers of markets are growing — refer to “Trends for Startups and Ideas to Build the Future“. Each company with its own take on how to do “it” better. So what does this all mean? Where are we headed with all this fragmentation?
In the end, the the power lays largely with the buyers/ customers in many of these markets as suppliers are so vast. However, it also creates some stumbling blocks for customers to pick the right cloud platform. In the B2C market, for example, fragmentation creates an annoyance for many users where there may be, especially, a social aspect and communities are split. But in the end, customers do win with more innovative solutions in a competitive market. This time of market frenzy will last a few years, I believe, before the consolidations really take place. And at that time, the cycle will restart where startups will sprout up again creating opportunity.
What are your thoughts on today’s growth of companies and solutions? How do you think the markets will play out?
And perhaps more for fun, what dating app are you on? 😉
March 19, 2014/by Daryl Lu
http://www.daryllu.com/wp-content/uploads/2018/10/entrepreneurial-ninja_logo_sm.png 0 0 Daryl Lu http://www.daryllu.com/wp-content/uploads/2018/10/entrepreneurial-ninja_logo_sm.png Daryl Lu2014-03-19 15:31:002020-12-09 10:18:13Who’s poised to profit in this fragmented, online dating world of startups?

I love reading what people think makes an entrepreneur successful.  Mostly because it reminds me everyday that there is no secret formula.  Every article is written to the writer’s perspective, and it really is so different from person to person.  Take the latest article I read: The Single Most Important Habit of Successful Entrepreneurs.  The author, Mr. Dan Kennedy of Entrepreneur, argues that punctuality is [his] criteria.

If anything, I would say that being detail-oriented would be my gauge of success.  Aside from potentially the mental aspect of being “gritty”, I have to say that being detail-oriented is my biggest criteria.  I admit — being detailed is kind of a big bucket.  It includes things like being detailed enough to check your work, knowing the background of a company or person you’re interviewing with, having that little extra “oomph” in your dress on a date, or even, yes, being on time because you prepared to take into account traffic.

Being detail-oriented separates the goods from the Greats.  Most people can do well on tasks they’re given, but think about someone who’s impressed you.  Was it the person who just got it done, or the person who got it done and went above and beyond to make it QUALITY?  It’s well known the little details the late Steve Jobs would require from Apple.  Then there’s Alabama’s Nick Saban and his pursuit of perfection from the start whistle to the end (the game against Auburn not withstanding).

I’ve noticed this actually in a lot of different quirks that executives watch for including some of the below:

Today’s post, not so much supply chain specific, but just as ninjas should be, I’m going to be flexible and talk about employee morale and culture.  I just finished reading an article by Fortune magazine re-posted on CNNMoney.com titled “Wal-Mart and the perils of ignoring staff complaints” (article is linked here).  I know myself and countless others have been thinking about how Black Friday has not-so-subtly crept into Thursday with many retailers opening their doors at 8PM on Thanksgiving Day.  It’s like 2013 car models have hit showrooms in August 2012 or Christmas decorations the day the spider web, pumpkins, and other Halloween decorations are taken down. But this time, creeping Black Friday into a holiday… that’s interesting.

The article primarily talks about how unhappy staff members are kept out of the loop of big changes (i.e. opening doors at 8PM on Thanksgiving Day for Wal-Mart).  The staff are now forced to work on a holiday where we, the consumers, get to relax and have time off to spend with our families.  The staff used to have this same holiday and time to spend with family.  Not so much anymore.  Big companies such as Wal-Mart, kinda-sorta big RIM (maker of Blackberry devices), and the like have had track records of ignoring staff.  Without a means of discussing complaints internally and with the explosion of social media, it only makes sense for these same employees to voice their frustrations out in the open on Facebook, Twitter, etc.  And that just makes everything spread like wildfire.  And to make things worse, some of these companies just fail to even address the complaints, and instead, send a canned, generic response which then adds fuel to the fire as more staff jump in igniting more attention from the outside world.  See the vicious cycle?

As we think about great companies and the bad, we think about the brand image.  The article went further to highlight a Weber Shandwick study (see study here) on company reputation and found that 63% of Execs say their companies’ market values are tied to reputations.  That doesn’t shock me.  How much do we hold Apple, Google, IBM in high regard?  Look at their stock prices… 561.70, 665.87, and 190.29, respectively as of November 21, 2012 4PM EST).  If you’re like me, you believe they have pretty good reputations and that they’ve got pretty good track records (in general) with their employees.

And you know what?  It’s not just about the employees of Wal-Mart, too, who actually now miss out on some nice family time.  I mean granted, to get ready for Black Friday at 12AM or 6AM still calls for some work on Thursday, but 8PM on Thursday just forces staffers to move up that time table.  However, it’s not just the staffers, right?  Thinking about it from a supply chain perspective, all the different movements in the supply chain also requires shippers, transporters (i.e. truckers), customer service centers (call centers), and the like to also move their time table up.

So as you consider Wal-Mart and other retailers’ employees, consider the holistic view of everyone involved who makes Black Friday happen.  I guess we should start calling it Black Thursday or Black Thanksgiving.  Not sure how I feel or if I’ll be out elbowing my way to the latest and greatest deals, but I’ll take the time now to give thanks to the hardworking men and women who make commerce happen, if you wanted to work or not.

And of course, I give thanks to YOU for reading… stay tuned for my thoughts on culture.  I ended up writing more than I thought so I’ll make this part 1 of… a couple. Cheers and Happy Thanksgiving!

I just read an interesting article about how Nokia actually had research and made internal presentations about devices similar to the iPhone and iPad 7 YEARS BEFORE Apple ever actually introduced the iPhone.  Former Nokia Designer Frank Nuovo rummages through his old notes and presentations, and recalls how his team had all the research and development on where the mobile industry was going — “the Nokia team showed a phone with a color touch screen set above a single button” [1].  Yet, with all this foresight and research, it was Apple who actually invented the iPhone, not Nokia.  Nokia believed in its core basic phones even to the day Apple turned the mobile industry right-side up in 2006.

This reminds me, too, of Xerox’s PARC (Palo Alto Research Center) back in the 70s when they actually developed the first PC.  Xerox spent boatloads of money in researching and developing new tech including the programming environment we’re all familiar with today with mice and the like.  And yet, it was actually Steve Jobs who saw the real value and future of the personal computer, and it was Steve Jobs who took it and ran with it and helped create the world we live in today.  Like Nokia mentioned before, Xerox had the opportunity to expand and grow and really change the technological landscape.  However, both companies failed to realize the real opportunities and read the tea leaves on how to shape their companies.

I’m not going to say companies should change their core competencies.  Instead, I want to highlight the true nature of why so many companies fail.  It’s ignorance.  Well, it’s more than that, but from the top, those who are actually steering the ship, ignorance and internal squabbles are what prevent companies from recognizing their ships are actually heading into an iceberg.

In today’s world, I’m constantly reminded of large retailers who are struggling to keep up with their more agile competitors who operate e-commerce solutions and direct fulfillment.  Take the Best Buy vs. Amazon battle.  It’s apparent that Best Buy’s 42.0M+ square feet of retail space is a huge anchor on Best Buy’s financials, an anchor e-commerce companies like Amazon are not held down by [2].  With the advent of apps and smartphone penetration of 47% [3] (and of course, it was lower several years ago, but it’s explosive growth was readily apparent), you have to think to management in big box retailers would have seen this coming.

Not all is bad, however.  In the case of Best Buy, anyways, the company has shifted much of its growth strategy away from the big box stores and are focusing on smaller standalone stores (SAS).  These stores features much smaller footprints (you’ve probably seen one in a mall near you) are mobile device-oriented.  Best Buy has been focusing much of its efforts on the growing mobile industry, and it’s clear where the company wants to go with 2012 projections of closing 50 big box stores in 2012 and opening 100 additional SAS formats across the U.S. [4]

Will Best Buy’s new shift in strategy work?  Will it even be enough to right the ship towards calmer waters?  Only time will tell.  This much is certain, though: don’t get stick your heels too deep in the ground when it comes to your operations.  Oftentimes, the writing is on the walls or in the case of Nokia, the writing was right there in product designs and in presentations — the business needs to pivot.  Pivot to grow.  Pivot to capture new revenues.  Pivot to survive.