Just finished Chris Voss’ Never Split the Difference. Chris was a 25-year veteran of the FBI’s hostage negotiation unit where he honed his skills in negotiation. In contrast to business school education of negotiation, Chris’ experience was cultivated in real-practice. Though his experience was incredibly serious (negotiations were over lives), he realized his ability to effectively negotiate in most every situation including business. 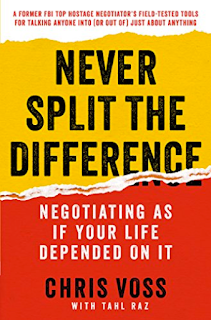 In contrast to teachings from other negotiation books like Getting to Yes, Chris realized that for him, there could not be a win-win situation. He could not “split the difference” with hostage takers – “I’ll take two hostages, you take the other two”. It was about life or death.
The crux of Chris’ learning and the foundation of the book is being able to separate the emotional side of a person vs. the logical. In this way, Chris could leverage his preparation to shake up the other party, and cause the other party to reveal their intentions. This enabled Chris to influence the negotiation so the other party was moving towards Chris’ goals seemingly on his/ her own.
Lots of take-aways here:

There are some real good tips in here from Chris, and lots of good take-aways for a sales guy (anyone, since we’re all negotiating something sometime). In hostage negotiation, there are limited options/ alternatives. In sales and business, there are usually other alternatives (best alternative to a negotiating agreement (BATNA)). As such, there are situations where win-win situations is the only way deals can be made. Looking for the only win can be short-sighted.

Is the Problem Enough of a Problem? Who Will I Have To Be Next?
Scroll to top