I just completed Dale Carnegie’s best-selling book How to Win Friends and Influence People. I’ve been excited for so long to read it as it’s all about psychology. 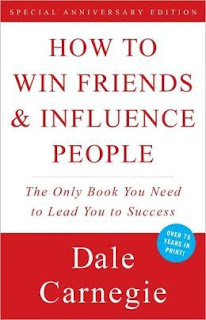 The book was different in style than what I was expecting. Perhaps because I’ve read many sales books recently like The Challenger Sale and SPIN Selling (review to come). The book was focused from a point-of-view what Dale Carnegie’s identified as effective tactics as well as stories from either his students or great leaders – notably several U.S. Presidents.
Each chapter was a lesson, and as I read the book, I was wondering how I would employ each lesson. However, I realized it’d be too challenging being literal and narrow. Instead, the book could be best understood and employed by collapsing the lessons into broader concepts.
Here are my take-aways then:

Check out the book. Reinforce things you may know, or may not have thought about. But also, take a moment to reflect on how you interact with others and the silent impression you give off.