In late October at the Sales Force Productivity Conference, I kept hearing whispers about a great speaker that I didn’t get a chance to hear – Lindsay McGregor. She talked about culture and what motivated employees. She also co-authored a book about high performing teams. This has always been interesting to me, so I sought out Lindsay to talk to her about her talk. I ended up running into her several times. When I told her all her books at the conference were sold out, she happily told me to send her an email, and she’d send a signed copy.
Well, I got the book in November – Primed to Perform – that she cowrote with Neel Doshi. After reading the book, it’s one of my favorites! I finished it a while ago, but I wanted the material to sit a little while longer before writing a review of it. Yes, it was that good. 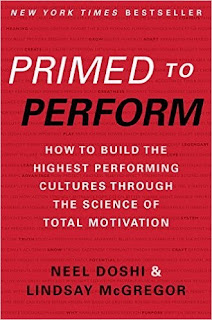 McGregor and Doshi studied hundreds of companies and other studies about high-performing companies to find the key factors of what drove their successes – developing the Total Motivation Factor (“TOMO”).
Here are my major take-aways:

There are many more take-aways from the book. In fact, this is one book I will read at least a few times a year to continually remind myself as my company grows and I build my teams. The company will continue to evolve, and enabling a culture that is agile and adaptive will be key to growth and having a sustainable competitive advantage.