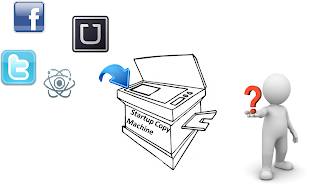 My buddy just sent me this article from The Next Web about the potential costs to build some of today’s big players in “startups” including Twitter, Instragram, Facebook, Uber, etc (see “How much does it cost to build the world’s hottest startups?“).  They’re not really startups anymore, though, I’d argue.  But of course, they used to be.  Here are some of the highlights:

What made this interesting for me also coincided with the notion of building a startup and a recent post on David Cumming’s blog post “Can’t the Software Just be Knocked Off“.  It’s also a notion people have asked me in regards to Body Boss.  The question makes many people think about keeping their ideas quiet, or even gives people a notion that they can just copy another program and have the same success or even better.  Some personal thoughts:
So what are your take-aways or thoughts about building copy cat products/ services?  How would you go about building a similar product, but tackling the market with a new twist?
December 5, 2013/by Daryl Lu
http://www.daryllu.com/wp-content/uploads/2018/10/entrepreneurial-ninja_logo_sm.png 0 0 Daryl Lu http://www.daryllu.com/wp-content/uploads/2018/10/entrepreneurial-ninja_logo_sm.png Daryl Lu2013-12-05 17:30:002020-12-09 10:16:00Companies are Icebergs: Why Copycats Don’t Equal Instant Success
Your Personal Brand: You’re a Walking, Talking Billboard A little bit of Psychology in Business? No. A LOT.
Scroll to top